It’s been a year. Recovering from a disaster like Hurricane Maria was never expected to be complete by now. A Category 4 hurricane, Maria engulfed the Islands of Puerto Rico on the 20th of September 2017, leaving thousands of people dead, many more without

the necessities of life, transforming certain ecosystems forever, traumatizing survivors, and changing the Islands of Puerto Rico forevermore. Hurricane Maria lead to heartache and hope, for people on the Islands and those of us watching in solidarity from afar. And on this anniversary, those of us who are very far away but left a part of our hearts there, still are pondering how to assist from here in the years ahead.

Since Maria, in my capacity as a law professor and director of the University at Buffalo School of Law Puerto Rico Recovery Assistance Legal Clinic, I have been to Puerto Rico five times. I traveled there in December, again for two weeks over January-February, then returned three times in the summer (in June, July, and August). As a lawyer offering pro bono policy and legal service, my presence was not needed immediately after the storm. I got there after some of the worst visible damage was repaired, and the planning for how to help people, communities, and the territory recover began in earnest. As I look back, I arrived as the intricate fragility of Puerto Rico’s new reality was setting in. 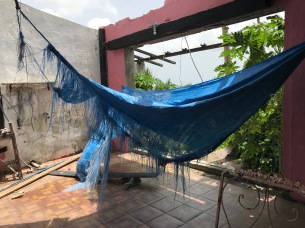 Through those trips, I have seen progress in recovery, and gotten to know people of amazing resilience. I have also come to understand the nature of the legal limitations facing the territory. I have puzzled about the legacy of challenging energy and water delivery services and how to encourage real energy, climate justice, and other sustainability. I have witnessed the tough economics of many of those whose families have called the Islands home for generations (as compared to those who visit to play or profit). I have seen the gorgeous ecosystem which has regrown in some ways, but been immutably changed in others. And I have looked into the eyes and heard the stories of some of those who are working for access to true justice.

My two favorite trips were when I had the honor of travelling alongside over a dozen amazing #UBLawResponds-PR student attorneys. With the backing of generous donors and the many extra hours of labor by dedicated staff, these young people worked extremely hard to prepare and serve in the wake of the disaster. The University at 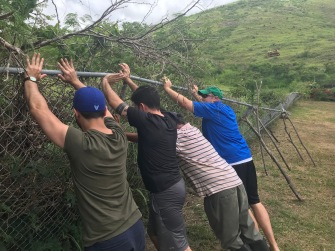 Buffalo School of Law Puerto Rico Recovery Assistance Legal Clinicwas the best of service-learning, offering raw insight into both human needs and human strength. The Clinic showed these soon-to-be attorneys up close what people with legal and policy training can do…and what they can’t do. It left most of them wanting to do more, not only in Puerto Rico, but also for other vulnerable populations.

Yet here we are, a year after Maria struck. In the reports that look back today, we can read and listen to incredibly intense stories. Like the one from NPR exploring how an “unbearable debt crisis, the antiquated power grid and gross political ambition and unreliability were accomplices to the natural disaster.”Or story exploring some personal aftermath published by the New York Times entitled “Sunrise Melodies and Tearful Reflections: Puerto Rico a Year After Maria,” relating the experiences of people “still wrangling with the federal government over money to rebuild their home” and noting that “generosity and the solidarity among neighbors was the only positive remnant of the storm.” Or one ABC affiliate’s video, reporting on a town where #UBLawResponds-PR Student Attorneys assisted with pro bono legal services, in a piece entitled “AccuWeather in Puerto Rico: Hundreds of homes in Loiza still damaged 1 year after Hurricane Maria.”Or a Reuters piece, that relays a heartbreaking truth: “shuttered businesses, blue tarp roofs and extensively damaged homes can still be seen throughout Puerto Rico a year after Hurricane Maria ripped through the island with 150 mile-per-hour winds, and access to electricity and fresh water remain spotty.” Or the Associate Press story “For Puerto Rico’s poor, hurricane was heavy blow” that tells the story of a man who received seriously insufficient federal aid and has emptied his pension since the storm, and “sees no immediate prospect of moving out of the only habitable space in his home, an enclosed balcony still missing windows from Maria.” Such vivid coverage of the actual storm itself one year ago was only the beginning. Stories of the tragic aftermath and the intricate fragility will continue for years to come.

#UBLawResponds-PR knows firsthand what Puerto Rico is facing, and is continuing to do work with and for Puerto Rico community partners. At this point, our work is primarily in the areas of resilience and energy/climate justice, insurance, and work on behalf of veterans who live there. We are proud of the service we have already done, and remain committed to being of continuing service from Buffalo. We know that, ¡Puerto Rico se levanta! (loosely translated to Puerto Rico stands up (or rises)) … and #UBLawResponds-PR will continue to stand with them.